BFS and DFS with Python

So I’ve found myself in a situation where I have had to revise simple Data Structures from my Software Engineering Degree. I have not done this for several years, so naturally my first step in this process was looking at the workings of various structures on Google (then subsequently Wikipedia). After refreshing my memory, I decided that the best thing to do was code up these algorithm.

Unfortunately many of the already Python implementations of these algorithms on the web are either over complicated or have readability issues or don’t emphasise the difference between the two algorithms.

I will attempt to explain both, and give a readable and understandable explanation of both. Targeted towards first year Computer Science or Software Engineering students.
Just a small note before I move on. I remember doing this in first year University where we had used Java. It was a nightmare. I programmed this in Python today and it made me think how much more we could’ve learnt if we used Python at USyd… anyway, here goes!

If you know what stacks and queues are skip the below two paragraphs.

Queue A Queue is a computation abstraction of a real-word queue. So, imagine a queue at the movies. The first person to arrive will get served first, the second will get served second etc. Basically a queue is first-come-first-serve. In Computer Science terms, this would be first-in-first-out.

Stack A Stack is (guess what) just like a real-world Stack. So, just imagine a bunch of plates being washed. All of them are stacked up after the washing of the plates. Now someone hungry comes (probably me) and wishes to take a plate. He/she would take the first plate on the stack. So basically the last plate added on the stack of plates was the first one to be used. So a stack is, in computer science terms is, last-in-first-out.

A Graph
A graph is a structure where one object is able to be linked to one or more objects. An example of a graph is something like Facebook or a food chain. See below for an image from wikipedia:

We call the ‘things’ nodes (in this case the numbers) and we call the links between two nodes the edges.

Firstly, we need to learn how to represent a graph computationally. We can represent graphs as a list of lists. Below is an example of how the above graph is represented

this basically tells us.

In our example though. We will be using a dictionary of lists, because our keys are text. A dictionary basically converts text to a number anyway.

Below is the graph and the computational representation: 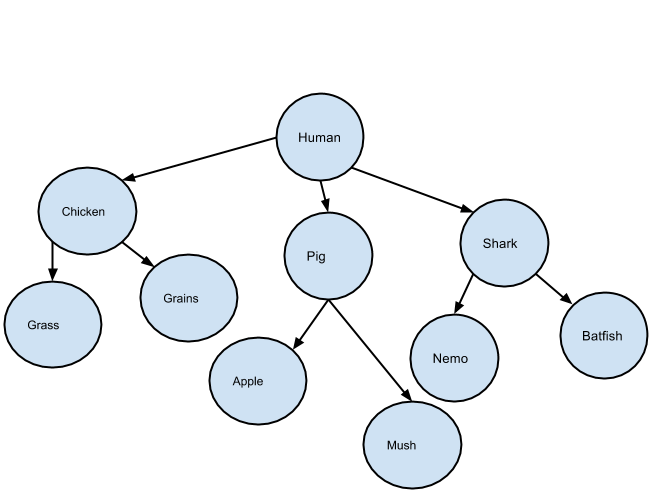 So how do we code DFS and BFS?

Like the above explanation given for the BFS and DFS. The algorithms are nearly the same as well. Except one algorithm uses the Queues (BFS) and the other uses the Stacks (BFS).

Note: We have used Python list comprehension to add to the Queue and Stack to stick with the text book definition of Stacks and Queues

The python code also Prints the current node being explored on the terminal so that you can see the path taken to explore.

This code is available on GitHub if you want to test it!