Post deployment tests provide additional confidence that unit tests or self-contained integration tests will not, as the tests themselves are interrogating a live instance of your application as a black box, rather than mocking aspects of your application like unit tests as a white box. In this post, I will run through how I do this with release pipelines on Azure DevOps using Pester as a testing framework.

The code for this post is on GitHub. The repository contains a .NET project called CoolApi.csproj with two PowerShell Scripts Invoke-Tests.ps1 and Invoke-TestsAfterDeployment.ps1. You can choose to fork or copy and paste into a private repository and follow on.

The Build and Release Pipeline

In this step we’ll setup the build and release pipeline for the CoolApi without tests. Feel free to skip this step and go straight to the next section if you already have a deployed application.

To start, setup a build pipeline on Azure DevOps. You can use your application or my CoolApi from the repository above, it already contains a build.yaml file so you can use this to quickly setup your build definition.

Next step, setup a release pipeline on Azure DevOps. I’ve setup my CoolApi to deploy into an Azure Web App by using the task from the marketplace called Azure App Service Deploy.

We need two PowerShell scripts to setup before integrating them into our release pipeline. The first one is the actual test script that interrogates our application called Invoke-Tests.ps1.

Windows 10 will automatically detect you’re using Pester from the keywords Describe, It, and Should. The above script accepts a parameter -Api. It then proceeds to do a test on the POST and the GET verbs on that Api using Pester.

and on another console you can run this:

The next script we need is a wrapper around the above script called Invoke-TestsAfterDeployment.ps1. This wrapper will be invoked from the release pipeline directly.

There are a few things we have to consider here:

Adding the Tests to the Release Pipeline

After you’ve committed these PowerShell scripts you’ll need to integrate them into your release pipeline. Edit your release pipeline and add them as an artifact. You have two options. Either adding them as an artifact as part of a build or adding them directly from a git repository. I’ve added them directly from a git repository. 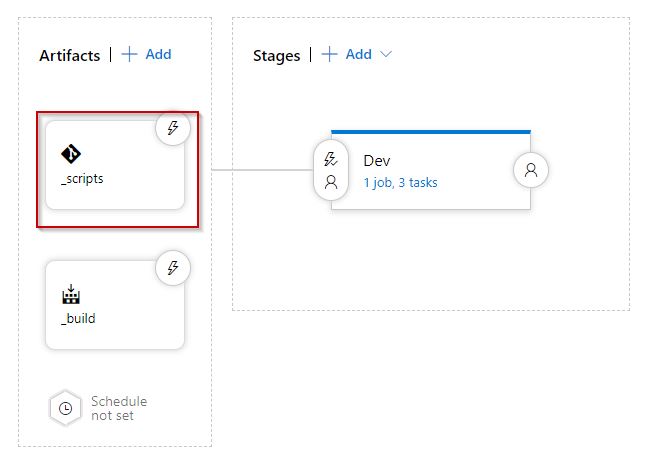 Edit your environment and add a PowerShell task. Match the fields below

After this step you’ll need to add a step Publish Test Results. Change the fields to look like:

If you run the release you will get a list of tests in the test tab of your release. 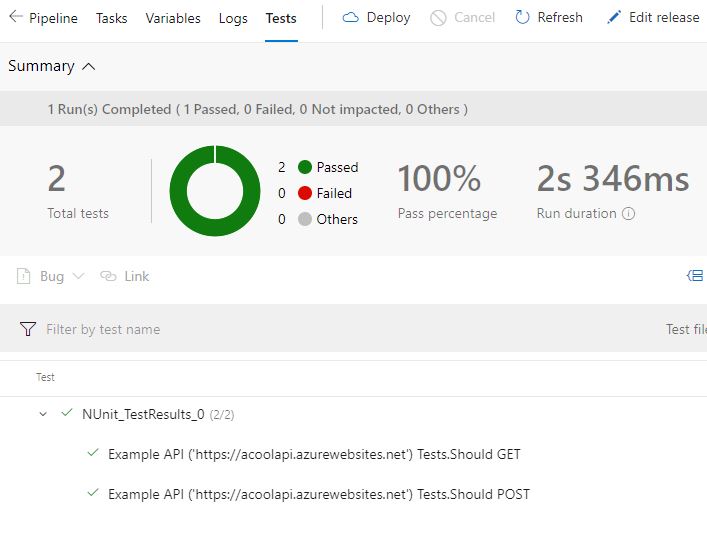 Push a failing test to your repository and test the script again. In your Invoke-Tests.ps1 file add this

Azure DevOps will present a failed release with failed tests.

You now know how to run post deploy scripts on Azure DevOps release pipelines. You may experience some issues such as:

No Tests Appearing in the Test Tab

Deployment not Failing When Tests Fail

Script is Not Appearing as An Artifact

Thank you for reading this blog post. If you have any suggestions please feel free to contact me!